South Maui is known for some of the best diving in the world and is one of the most popular Maui ocean activities in Wailea. Shore diving out of the beach accesses in Wailea couldn’t be easier, with restrooms, showers, and room to sit and talk story after experiencing the many creatures unique to the islands. And during the winter months listen for the song of the humpback whale.

Here’s a little “cheat sheet” of the Wailea dive and snorkel spots.

Ulua/Mokapu Located just north of Wailea Point, the lava point at Ulua and Mokapu beach is an excellent introductory shore dive. This is often where you’ll find Wailea scuba diving schools taking their new comers due to the mellow waters and gradual incline. There’s a great turtle cleaning station on the second reef. It is also a great place for the family to snorkel.

Wailea Point A beautiful shallow water shore dive that’s good for snorkeling too. The dive ranges from 25-50 feet and is filled with sea turtles and tropical fish. The reef is very lively here with sea creatures. Wailea Point is an excellent spot for beginners to dive. 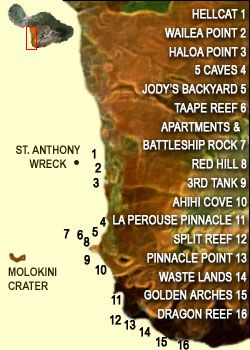 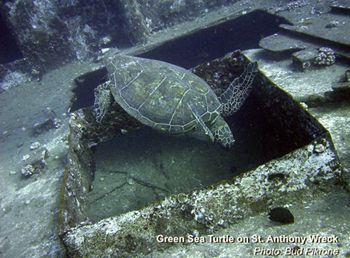 St. Anthony is a 65-foot shrimp boat that was intentionally sunk in October 1997 about 1/2 mile off the Wailea coast, creating Maui’s most popular wreck dive and home to many Green Sea Turtles. The turtles can be seen on the decks, inside the V-berth and cabins. On occasion you even may encounter a turtle clinging on one of the horizontal or vertical bars while it rests. What a great dive!

Along the sandy bottom next to the wreck, old tires and cement blocks are scattered, creating an artificial reef that is fun to explore. In addition to turtles, you may see Moray Eels, Trumpetfish, Batfish, reef sharks, and an abundant supply of curious Milletseed Butterflyfish.

A new artificial reef has been established adjacent to the St. Anthony. On December 2, 2009 the Hawaii Department of Land & Natural Resources deployed 1,400 “Z Modules” in approximately 75 feet of water to create an artificial reef.

Molokini Crater Located 2 miles off Maui’s south coast, Molokini is an extinct volcano that is now designated as a State Marine Life and Bird Conservation District. Its crescent shape provides protection from waves and powerful currents making this area one of the top ten dive sites in the world. Molokini’s back wall sharply drops off to depths of 300 feet. In the center is a lush reef area with excellent viewing up to 150 feet. The pristine waters are home to about 250 species of fish – some of which are found nowhere else on earth. Dive and snorkel tours leave for Molokini from Ma’alaea Harbor or Kihei Boat Ramp. The best conditions are early in the morning.

Hidden Pinnacle From a depth of 120 feet, a single pinnacle covered in coral reaches all the way to the surface above. Hidden Pinnacle is located on the Southwest of Maui and can only be accessed when conditions are optimal. The currents are strong so this dive should only be made by advanced divers. You’ll most likely see octo coral, sponges, and pyramid butterfly fish. It also has some great shallow lava formations nearby. The valleys, canyons and arches are wonderful for beginner divers.

Turtle Caves 60 foot lava pinnacles rise from the 70 foot depths at Turtle Caves. With around 6 pinnacles of varying sorts scattered around the area, Turtle Caves is a remarkable dive site. Some of these pinnacles form canyons, some have caves, and others are hollow. Turtle Caves have plenty of sea life with hard and soft coral as well as turtles.

Haloa Point A shallow dive at only 30 feet, Halo Point is located inshore along Makena Coast in South Maui. Between channels of sand, divers will find lava ridges encrusted in coral.

Five Caves Known as Five Caves, Five Graves, or Makena Landing, this is a wonderful spot to scuba dive as well as snorkel. Shore diving becomes a bit of a long swim to get to the good stuff, making a boat dive convenient. The bottom ranges from 30 to 45 feet and is full of lava ridges, sea pinnacles, and caves. You’ll find scores of tropical fish, turtles, eels, and white tipped reef sharks. Five Caves is one of the best spots to see a shark while diving. Another great spot is the backside of Molokini Crater.

Jody’s Backyard A small area at a depth of 55 feet, Jody’s backyard is filled with lava ridges and coral mounds. There are also antler coral trees with fish living in and around them. This is a great place to focus on underwater photography.

Tank and Landing Craft A quarter mile off of the Makena coast just NW of the Makena Resort Hotel, you’ll find two water borne landing craft from World War II. They are both amtracs (amphibious tractors), one of which was set up as an armored personnel carrier. They are at a depth of 60 feet and attract fish and other underwater sea life. Because they are the only landmarks within a large area of sand, they tend to act as the only refuge for many sea creatures. It’s quite a sight!

Red Hill Pu’u Ola’i is a cinder cone off of the South Coast of Maui formed out of red lava rock. The Wailea scuba site is situated at 30 to 40 feet and is a great spot to explore the unique sea life that inhabits this area. You may find green sea turtles, zebra eels, and angler fish here.

Taape Reef Composed of coral reef, lava formations and sand, this area was a popular fishing ground for the Ancient Hawaiians. The reef is named after the blue-lined snapper that collect in a school here. Just outside of this reef is another reef that reaches depths of 85 feet. Divers will find helmet shells and large antler coral along the lava formations of this reef. Taape Reef is a great spot to see some beautiful sea life.

Apartments and Battleship Rock Many divers mistake the name for a wreck dive, but Battleship Rock is named after a rock formation that looks similar to a battleship. It is a deep water dive at 110 feet and for experienced divers. Large lava ridges make this area a great dive. Because of it’s depth, Battleship Rock is seldom visited making this dive site pristine. You’ll find a variety of sea life such as red sponges, pelagic fish, and black coral.

Third Tank Yet another World War II tank dots the ocean floor in Maui. This is a mortar mounted amtrac that acts as an artificial reef to the sealife around it. Sitting off of Makena Beach at a depth of 80 feet, and being the only land mass within a large area of sand, the tank attracts huge amounts of sealife looking for a safe haven. You’ll find schools of snapper and goatfish swarming around the underwater tank.

Ahihi Cove Ahihi Cove is a marine reserve with plenty of sealife. The sheltered area inside of the cove is mostly shallow, rarily exceeding 25 feet. Once outside, the ocean floor drops to around 55 feet. You can find moray eels, urchins, tropical fish and plenty of corals in Ahihi Cove. It’s protected waters are better suited for snorkelers than those who’d like to dive deeper. Enter the water from the North side of the cove next to the houses.

La Perouse Pinnacle La Perouse Pinnacle is a 50 foot tall sea pinnacle with a base at a depth of 60 feet in the middle of La Perouse Bay. The pinnacle is covered in sealife. Scuba divers will most likely see goat fish, finger coral, trigger fish, porcupine puffers, bird wrasse, and damsel fish. This area was mostly formed from Maui’s most recent lava flow from the side of Haleakala. On occasion, divers may come upon a curious group of spinner dolphins.

Split Reef Split Reef is named so because it is a finger of lava flow off of the Makena Coast which split while cooling. This makes the area very interesting with its ridges, sand channels and various valleys. Most divers dive at a depth of 50 feet. Not as commonly explored, much of this reef is untouched and in its natural state.

Waste Lands Off the coast of South Maui, Waste Land lies at a depth of 85 to 110 feet. This is a fun dive to do when the current is strong. Divers regularly see schools of snapper, goat fish, surgeon as well as large antler coral heads. The area is a mix of lava formations. Between the many ridges, you’ll find all kinds of sea life.

Pinnacle Point A wonderful Maui dive spot to explore, Pinnacle Point is diverse in its lava formations with arches, canyons, and valleys. At a depth of 60 feet, this is an intriguing dive for all levels of experience.

Golden Arches Underwater Photographers are in for a treat at Golden Arches. The underside of the three arches are carpeted with gold and orange tube coral and bright orange and red sponges. At a depth of 70 feet, you’ll find lobster living in the cracks.

Dragon Reef Dragon Reef is shaped like the arching back of a dragon with white leather coral for scales. This incredible dive location is accented with a rock formation that resembles an open-mouthed dragon head. There are many interesting sea creatures found between the depths of 20 and 70 feet.