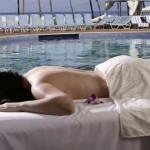 Anyone familiar with personal pampering and bodily rejuvenation in Maui knows about the Grand Wailea’s Spa Grande.  Late 2015 offered 3 months of refresh and rejuvenation for the spa itself.  Spa director, Sharon Ogawa stated “it was in need of some aloha. We wanted it to have a fresher, more modern feel.”

Some of the pampering that the century-old  50,000 square feet facility received included:

Each of the baths embody a tribute to Maui’s oceans, clouds, waterfalls, rain forests and streams, infused with a signature bath salt and scent.

In addition to the facelift, the new year also brought in some new treatment therapies offered by the spa.

Read more about other spas in Wailea.