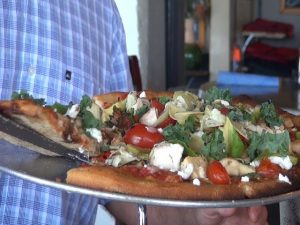 Manoli’s Pizza is just one of the great places to dine in Maui participating in the annual Restaurant Week Wailea benefiting the Maui Food Bank.  Manoli’s joins 17 other restaurants committed to supporting the community and fighting hunger in Maui.

This local eatery is the newest addition to the family of restaurants owned and operated by the Tri-Star Restaurant Group.  President and CEO of the group, Aaron Placourakis has become a pillar in Maui’s dining community, opening his first restaurant, Nick’s Fishmarket back in 1997.  Sarento’s on the beach was added a few years later.  Son’z Steakhouse has been a dining fixture at the Hyatt since 2005.

Tri-Star Group’s eateries have recently earned several Aipono awards, including:  best service, wine list, steak and romantic setting. Placourakis also received a lifetime achievement award for his 20-plus years of relentless support for the community which spans well beyond his participation in this 7th edition of Restaurant Week.

All of the restaurants have created prix fixe menu selections, priced from $29 to $49 per person for a three-course meal (tax, gratuity and beverages not included in price.)  Tri-Star’s Corporate Executive Chef Geno Sarmiento prides himself on using locally sourced ingredients when possible year-round, which will also be used in Restaurant Week’s special menu.

A sampling of Manoli’s $29 meal selection includes a choice of house, caesar or greek salad and entrée selections such as:

Tiramisu finishes off a perfect night at Manoli’s.

Browse the entire list of participating Restaurant Week eateries and read the full article By Kiaora Bohlool at MauiNow.com>>

← Experience a Taste of Wailea when Visiting Maui Four Seasons Maui At Wailea: Setting The Bar Delivering Exceptional Experiences To The Wealthy →