World-renowned chefs will work their magic during Maui’s Celebrity Chef Tour this weekend, benefiting the James Beard Foundation. The tour is traveling across the country; its stop on Maui is hosted by Grand Wailea, a Waldorf Astoria Resort. Executive Chef Ryan Urig will serve as the host chef.

The weekend brings innovative food and creative cocktail experiences while celebrating Maui’s farmers, purveyors and culinary artisans.  The tour’s big-name chefs have restaurants that dominate the ‘Top 10’ lists around the country.

The menu for the weekend is outlined but not set until the chefs hand-pick the best in-season Maui produce, based on what speaks to them. Chef Ryan Urig will take the visiting chefs on a tour of local farms, where they meet with the farmers to determine their choice ingredients. 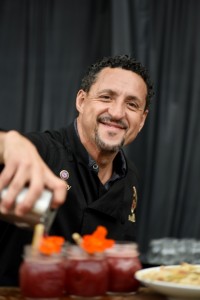 The farm-to-table theme is inspired by the chefs’ meeting with local farmers as they each choose a course to execute in front of the guests. Wines are paired for each dish and specialty cocktails are again mixed by Manny Hinojosa.

Saturday’s dinner ($250 per person) is sold out, but tickets are still available for Friday’s cocktail reception. Book those here or by calling Grand Wailea at 875-1234.

The chefs will also visit with students at Maui Culinary Academy and answer their questions.  The broader mission of the Celebrity Chef Tour is to give back to the James Beard Foundation, who continues to celebrate, nurture and honor America’s diverse culinary heritage through programs that educate and inspire. Many of the nation’s finest chefs credit the Foundation for helping them launch their successful careers.