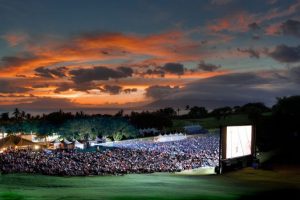 The 2016 Maui Film Festival Schedule of Events is complete and off to a great start.

The annual event rolls into its 17th year from June 15-19, 2016 in Wailea. The Festival features some of Maui’s great venues for an impressive list of film screenings: Wailea Beach’s Toes-in-the-Sand Cinema, the Castle Theater at Kahului’s Maui Arts & Cultural Center and the Celestial Cinema at Wailea’s Golf and Emerald Golf Course – a crowd favorite. The Maui Film Festival will also be paying tribute to filmmakers and presenting awards to several Hollywood A-Listers.